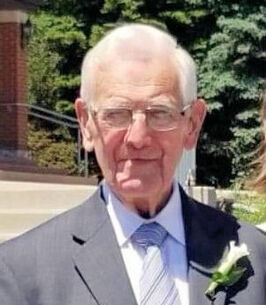 Donald was born in Halifax, Nova Scotia on November 30, 1931. His mother, Nelly, was a survivor of the Halifax Explosion. He joined the Canadian Armed Forces at the age of 23. He was married to the love of his life, Dorothea on August 11, 1956 in Halifax. They were posted to Germany and then to Petawawa in 1959. Donald served with the Canadian Guard and later as a member of the RCR, retiring after 30 years with the rank of Master Warrant Officer. Donald was a deeply religious man and devoted Catholic. He was a craftsman and built his own home and lived there with his wife, Dorothea, from 1975 until they moved this May, 2022. Donald will be remembered as a kind and generous man and was loved by all who knew him. He will be deeply missed by his family and friends.

“They blessed the lands for whom is to come after them”.

Friends are invited to share their memories of Donald with his family on Sunday July 24th at the Murphy Funeral Home, 296 Isabella Street, Pembroke from 2:00 p.m. to 5:30 p.m. A Funeral Mass will be celebrated on Monday July 25th at 10:30 a.m. in St. Columbkille’s Cathedral Pembroke. Interment St. Columba’s Cemetery.

In lieu of flowers Donations can be sent to Don Bosco Missions, 11991 Pierre Baillargeon, Montreal, QC, H1E 2E5 or for masses for Donald.


THE FUNERAL MASS WILL BE LIVE STREAMED ON MONDAY AT 10:30 AM
AND RECORDED AND AVAILABLE TO VIEW LATER MONDAY AFTERNOON BY CLICKING PHOTOS & VIDEOS AT THE TOP OF THE PAGE THEN CLICK ON VIEW WEB CAST.

All rights reserved. This obituary is also archived at obittree.com